THE UNLIKELY ESCAPE OF URIAH HEEP

The ultimate book-lover’s fantasy, featuring a young scholar with the power to bring literary characters into the world, for fans of The Magicians, Mr. Penumbra’s 24-Hour Bookstore, and The Invisible Library.

For his entire life, Charley Sutherland has concealed a magical ability he can’t quite control: he can bring characters from books into the real world. His older brother, Rob — a young lawyer with a normal house, a normal fiancee, and an utterly normal life — hopes that this strange family secret will disappear with disuse, and he will be discharged from his life’s duty of protecting Charley and the real world from each other. But then, literary characters start causing trouble in their city, making threats about destroying the world… and for once, it isn’t Charley’s doing.There’s someone else who shares his powers. It’s up to Charley and a reluctant Rob to stop them, before these characters tear apart the fabric of reality.

“Many have tried and some have succeeded in writing mashups with famed literary characters, but Parry knocks it out of the park. She plays with the canon without trying to imitate it, all the while spinning a truly heartfelt story about the strained but powerful love between Rob and Charley. An appreciation for Dickens and a passing knowledge of literary theory will provide extra enjoyment, but a lack thereof is no excuse to miss this page-turning fantasy. Just plain wonderful.” -Kirkus (starred review)

“Fun, witty, and full of insights about the powerful effect of stories on our lives, this book is highly recommended. Give it to readers who devoured Jasper Fforde, Jim C. Hines’ Libriomancer (2012), and Genevieve Cogman’s The Invisible Library (2016), and to readers looking for adventurous fantasy with a soupçon of family drama.“

“If you’ve ever checked the backs of your wardrobe for snow and lamp-light — if you’ve ever longed to visit Pemberley House or 221B Baker Street, to battle the Jabberwock or wander through a fictional London fog — this book belongs to you. It’s a star-studded literary tour and a tangled mystery and a reflection on reading itself; it’s a pure delight.“―Alix E. Harrow, bestselling author of The Ten Thousand Doors of January

“H.G. Parry’s ambitious debut novel is a delight of magic and literature, love and adventure. With vibrant characters and a passion for story that shines through every word, this engaging read establishes Parry as a writer to watch.“―Kat Howard

“A delightful blend of adventure and mystery and marvel, a story in which the fantastical becomes real. This beautifully-written novel is an exploration of the power fiction wields — the power to inform and to change, even to endanger, our everyday world.”―Louisa Morgan

“A daring exploration of the worlds within words. Parry writes with the keen insight of Sherlock Holmes, the generous heart of David Copperfield, and the haunting soul of Dorian Grey.“―Jordanna Max Brodsky

“A joyous adventure through all the tales you’ve ever loved. Funny, charming, clever and heartfelt, you’re absolutely going to adore The Unlikely Escape of Uriah Heep.”―Tasha Suri

“H.G. Parry has crafted an imaginative and unique exploration of how words shift our lives in ways big and small. The Unlikely Escape of Uriah Heep is a rollicking adventure that thrills like Neil Gaiman’s Neverwhere mashed up with Penny Dreadful in the best post-modern way. Equal parts sibling rivalry, crackling mystery, and Dickensian battle royale, it’ll be one of your most fun reads this year.”―Mike Chen

“Clever, emotionally compelling, and teeming with witty allusions. In a story reminiscent of the literary world-bending adventures of Jasper Fforde’s Thursday Next, Parry has crafted a tale which will appeal to the cherished dreams-and secret nightmares-of all bibliophiles.”―Cass Morris

“Parry does a lovely dance on and around the stage of Dickens and other classical literature, playing fast and loose with the nature of reality to tell a story about the transformative act of the reading process and the importance of family, both found and not. The Unlikely Escape of Uriah Heep is dead clever and enormously satisfying.“―Vivian Shaw

“Engaging and intelligent, The Unlikely Escape of Uriah Heep kept me turning the pages to discover familiar characters and surprising twists.”―Rowenna Miller

A DECLARATION OF THE RIGHTS OF MAGICIANS 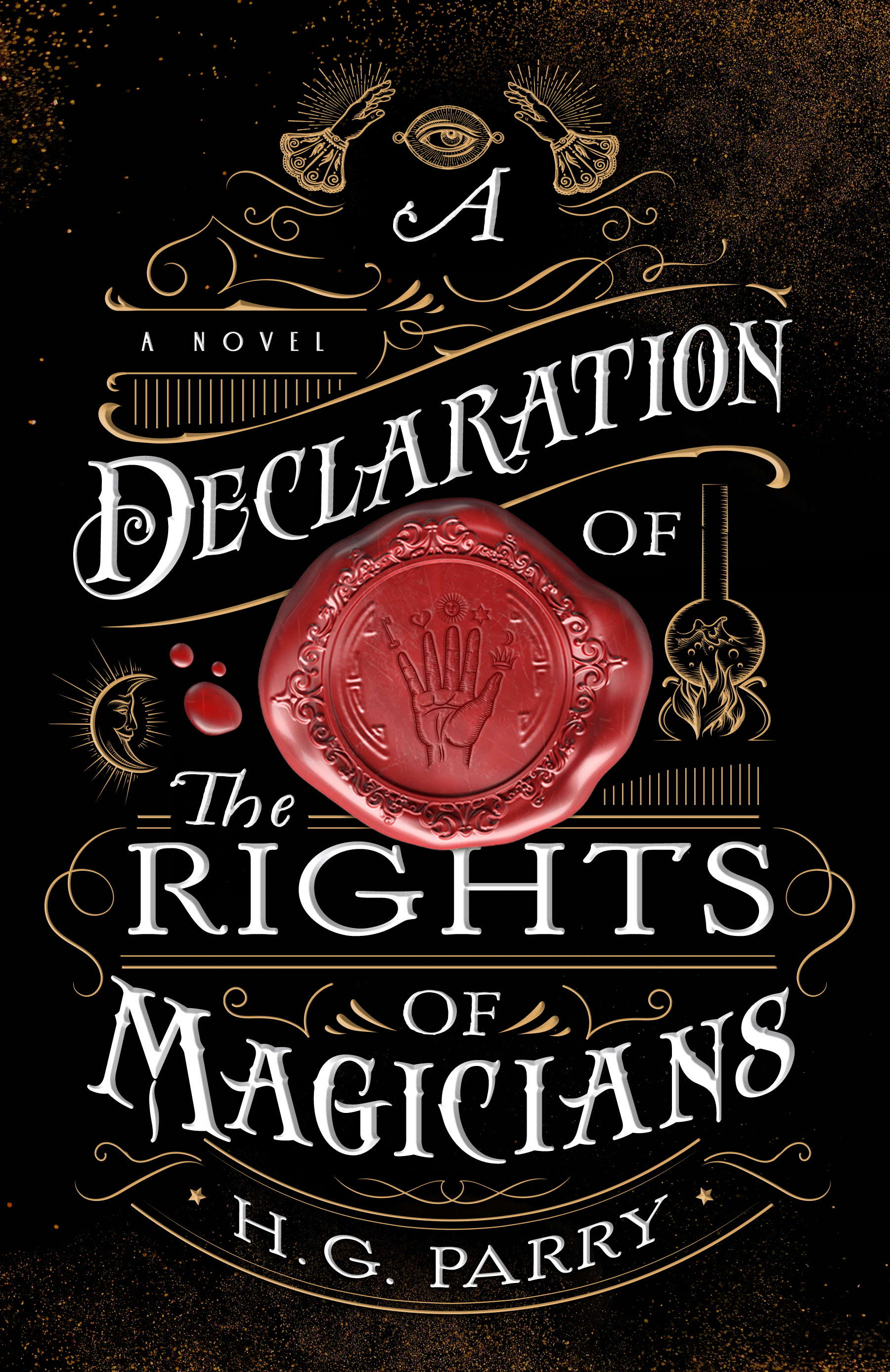 A sweeping tale of revolution and wonder in a world not quite like our own. It is the Age of Enlightenment — of new and magical political movements, from the necromancer Robespierre calling for revolution in France to the weather mage Toussaint L’Ouverture leading the slaves of Haiti in their fight for freedom, to the bold new Prime Minister William Pitt weighing the legalization of magic amongst commoners in Britain and abolition throughout its colonies overseas. But amidst all of the upheaval of the early modern world, there is an unknown force inciting all of human civilization into violent conflict.

“A rich, sprawling epic full of history and magic, Declaration is Jonathan Strange with international politics and vampires. I loved it.”―Alix E. Harrow, author of The Ten Thousand Doors of January

“A witty, riveting historical fantasy….Parry has a historian’s eye for period detail and weaves real figures from history-including Robespierre and Toussaint L’Ouverture-throughout her poetic tale of justice, liberation, and dark magic. This is a knockout.”―Publishers Weekly (starred review)

“Impeccably researched and epically written, this novel is a stellar start to what promises to be a grand new fantasy series.”―Booklist (starred review)

“I absolutely loved it. It held my attention from the beginning and throughout. It’s a beautiful tapestry of words, a combination of carefully observed and researched history and a well-thought-out and fascinating system of magic. An absolute delight to read; splendid and fluid, with beautiful and complex use of language.”―Genevieve Cogman, author of The Invisible Library

“Fans of Jonathan Strange & Mr Norrell will be enchanted by this sprawling epic of revolution and dark magic.“―Locus

“It’s no simple task to wrangle fifteen years of tumult in a few hundred pages, but Parry manages it with a deft hand. Her alternate history puts a human face on the titans of the past, while weaving in supernatural elements that add a whole new dimension. I stayed up well past my bedtime to find out what happens next.”―Marie Brennan, author of the Memoirs of Lady Trent series

“Impressively intricate; fans of the magic-and-history of Jonathan Strange & Mr Norrell will be delighted.”―Alexandra Rowland, author of A Conspiracy of Truths

A RADICAL ACT OF FREE MAGIC

The Concord has been broken, and a war of magic engulfs the world.

In France, the brilliant young battle-mage Napoleon Bonaparte has summoned a kraken from the depths, and under his command the Army of the Dead have all but conquered Europe. Britain fights back, protected by the gulf of the channel and powerful fire-magic, but Wilberforce’s own battle to bring about free magic and abolition has met a dead end in the face of an increasingly fearful and repressive government. In Saint Domingue, Fina helps Toussaint Louverture navigate these opposing forces to liberate the country.

But there is another, even darker war being fought beneath the surface: the first vampire war in hundreds of years. The enemy blood magician who orchestrated Robespierre’s downfall is using the Revolutionary Wars to bring about a return to dark magic to claim all of Europe. Across the world, only a few know of his existence and the choices they make will shape the new age of magic.

“A first-rate blend of political drama and magic battle–action…. Brings the series’ meditations on idealism, the fight for human rights, and the necessary limits of institutional power to a head. Absolutely superb.” ―Kirkus (starred review)

It is 1912, and for the last seventy years magic has all but disappeared from the world. Yet magic is all Biddy has ever known.

Orphaned in a shipwreck as a baby, Biddy grew up on Hy-Brasil, a legendary island off the coast of Ireland hidden by magic and glimpsed by rare travelers who return with stories of wild black rabbits and a lone magician in a castle. To Biddy, the island is her home, a place of ancient trees and sea-salt air and mysteries, and the magician, Rowan, is her guardian. She loves both, but as her seventeenth birthday approaches, she is stifled by her solitude and frustrated by Rowan’s refusal to let her leave. He himself leaves almost every night, transforming into a raven and flying to the mainland, and never tells her where or why he goes.

One night, Rowan fails to come home from his mysterious travels. When Biddy ventures into his nightmares to rescue him, she learns not only where he goes every night, but the terrible things that happened in the last days of magic that caused Rowan to flee to Hy-Brasil. Rowan has powerful enemies who threaten the safety of the island. Biddy’s determination to protect her home and her guardian takes her away from the safety of Hy-Brasil, to the poorhouses of Whitechapel, a secret castle beneath London streets, the ruins of an ancient civilization, and finally to a desperate chance to restore lost magic. But the closer she comes to answers, the more she comes to question everything she has ever believed about Rowan, her origins, and the cost of bringing magic back into the world.

ADONAIS and other stories

Joe Stefko approached me in January 2020 (the Before Times!) proposing this book, and I’m so thrilled we were able to make it happen. His work is stunning and completely unique, and it’s been a pleasure to work with him. These stories were written and published in different years, in different places, from my first published work in 2014 to the title story, Adonais, which appears for the first time in this collection (and sees a group of Romantic poets waking up in a very strange afterlife). I’m delighted to have them all together again, in such a special home.